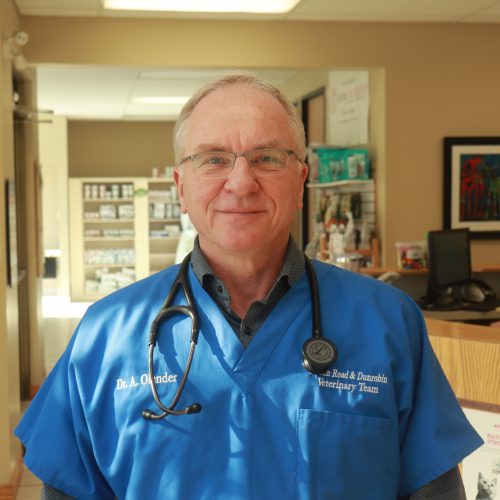 Dr. Andrzej Olender graduated in 1990 from the Western College of Veterinary Medicine in Saskatoon, Saskatchewan. He opened his small animal and equine mobile practice on March Road in 1991. Soon after, in 1994, he acquired the Dunrobin Veterinary Clinic. “Dr. O.”, his wife and four children have lived in North Kanata since the early 1990s. They share their home with two cats named Vegetable and Zelda. Why Vegetable? Well, she was found at a local grocery store in the produce department, hence her name. After being brought to the March Road Veterinary Hospital, Veggie was adopted by the family. In his spare time, Dr. O. likes to spend time in his family’s garden (it’s a big garden!), downhill skiing, and learning new languages. Although Dr. O. has special interests in many aspects of veterinary medicine, his main focus is in surgery, ultrasound, and dentistry. He is one of the few veterinarians in Ottawa repairing cruciate ligaments with TTA (Tibial Tuberosity Advancement) surgery and various extra-capsular techniques, like the Arthrex TightRope, the SwiveLock Knottless techniques, and the Arthrex Corkscrew and FASTak techniques. Dr. O enjoys mentoring new veterinarians and students and insists on continuing education. 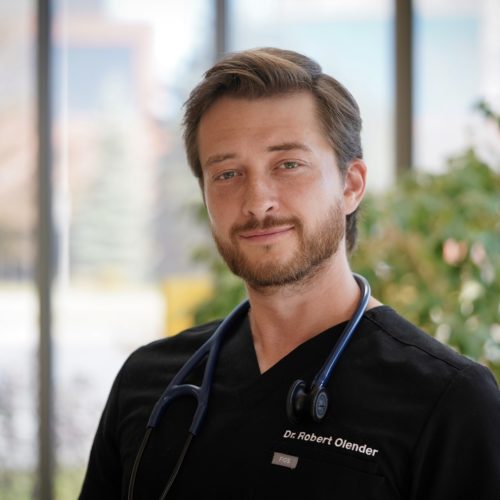 Dr. Robert Olender graduated with distinction from the Ontario Veterinary College in 2017 after completing an Honours Bachelor of Science degree in biochemistry at the University of Ottawa. Robert was born and raised in Kanata and was thrilled to return to the family practice after graduation. He has worked at the March Road and Dunrobin hospitals since he was young, wearing several different hats working as a kennel assistant, receptionist, and taking many responsibilities of a technician. Apart from his coveted puppy/kitten appointments, Robert has a keen interest in dermatology, surgery, and preventative medicine. Robert enjoys hockey, fishing, travelling, and manages to make the odd quilt in his spare time. He shares his home with the love of his life, Norma J. Jean. She is a beautiful young tabby who loves exploring different parks around Ottawa on her harness 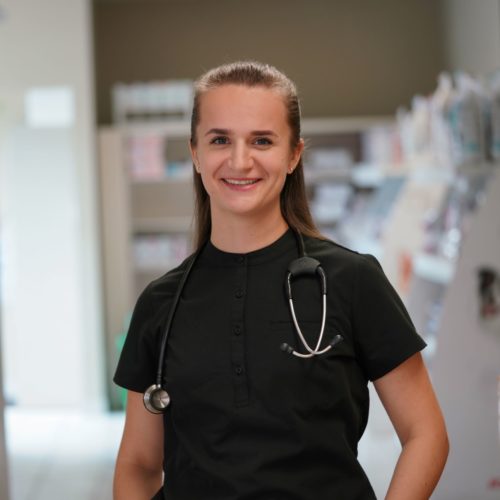 Oleksandra is originally from Ukraine, where she studied Veterinary Medicine at the University of Life and Environmental Sciences of Ukraine. She came to Canada in 2018 and completed the Veterinary Technician program at Algonquin College, graduating with distinction. She has always cared for animals for as long as she can remember and it turned into a passion for veterinary medicine.
Oleksandra has a keen interest in surgery, diagnostic imaging and pocket pet medicine. At home, she has a 25 year old tortoise named Yulya and a small rabbit named Masia. In her free time, Oleksandra enjoys travelling, hiking, skating, reading books, and spending time with her family. 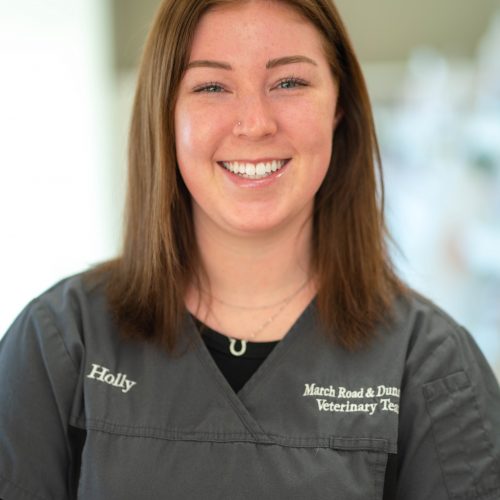 Holly joined the team in August 2019. She has a mixed puppy named Payton who is full of energy, so Holly's hands are always full. If she is not with Payton, Holly is out riding her horse Charlotte or at work. 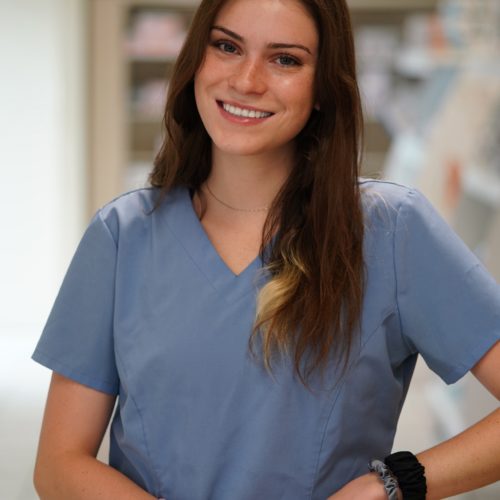 Danielle completed her Veterinary Assistant program at St. Lawrence College in 2020. She first became interested in veterinary medicine in high school when she volunteered at the local wildlife rehabilitation center. She shares her life with her dogs Scooby, Charlie, and two cats Patty and Benny. When time permits she continues to visit and help out with wildlife rehab including fostering abandoned racoon babies. She loves to be outdoors lakeside catching fish and educating her young cousins on frogs, turtles, and anything outdoors. 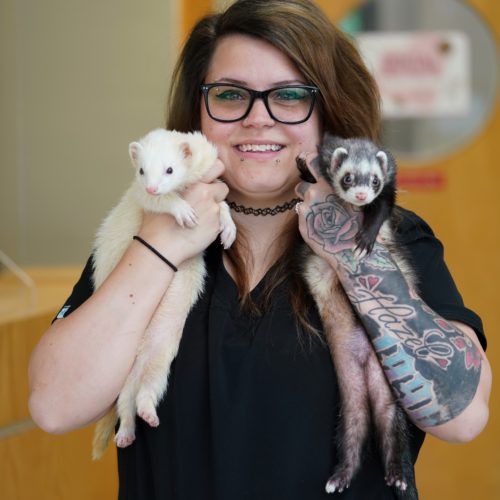 Bryanna has always had a love for both the medical field and animals. Combining the two and working as a veterinary assistant, this has sparked an incomparable passion. Honing her skills in an Emergency Department and ICU for 3 years, Bryanna has found her home at March Road Veterinary Hospital. She is a superstar mother to two beautiful tiny humans and two lovable ferrets. When Bryanna is not working along side our veterinarians and technicians, she is helping the clients and patients on reception. Her looks may be deceiving, but Bryanna has a heart of gold and loves caring for everyone's beloved companions. 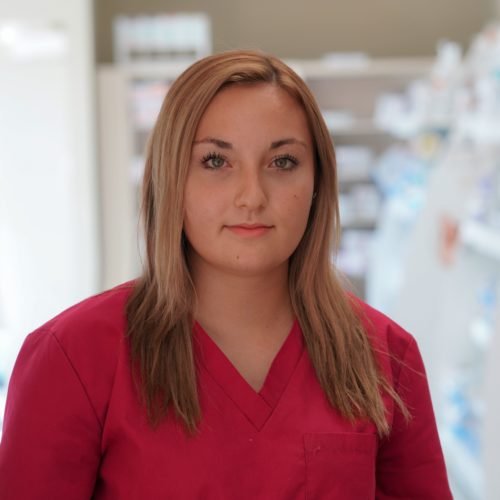 Cameron grew up on a a cattle farm in Dunrobin. She has a labradoodle, miniature bull dog, and a goat named Gerald. Cameron enjoys riding horses, and spending time with her family. 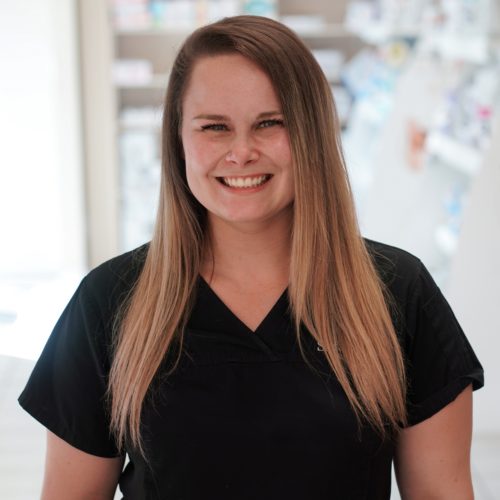 Tarah graduated from Algonquin College with her diploma in Early Childhood Education. After working in the childcare field for over 10 years, she joined our team in 2020. She uses her patience and caring personality working as both a CSR and Veterinary Assistant along side our veterinary staff. Day to day, you can find Tarah answering your phone calls or providing your pet with excellent loving care. She has a sweet fluffy dog named Pippin, who fills her heart and home with love. When not in the clinic, Tarah enjoys baking , creating art projects, or caring for her family and plants in her home. 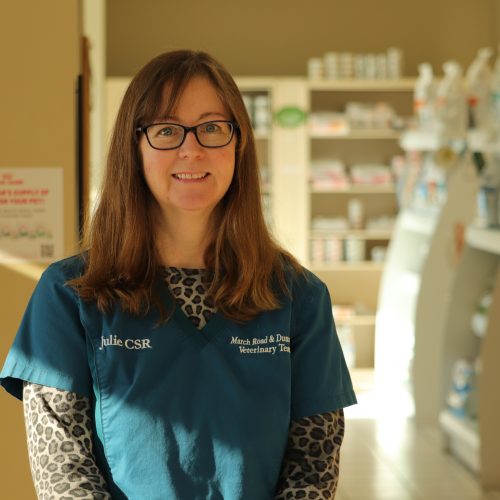 Julie is originally from Northern Ireland. Her family emigrated to Canada in 1974 settling in the suburbs of Toronto. Julie completed her Animal Sciences diploma course in 1998 and eagerly entered the animal care industry shortly thereafter. An avid animal lover, Julie is a “lifer” having never lived a single moment without having a pet her entire life! Wife, mother and grandmother, Julie is kept busy with her family, work and pets. Which include three misbehaving cats, Copper, Simon and Midnight and her granddog, Scotch. In 2017, the whole family moved to Dunrobin and Julie was thrilled to join the March Road and Dunrobin team 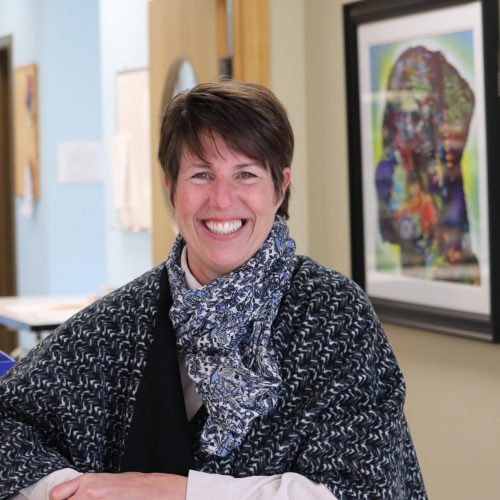 Tobie decided to combine her knowledge of business practices with her life-long passion for animals after several years in the high-tech industry. She joined the team as a CSR/VA in 2007 after graduating from the VA program at Algonquin College. Tobie quickly moved into a managerial role overseeing the day-to-day operations of the practices. She enjoys spending her free time on her little hobby farm with her husband, two dogs, two cats and her horse. 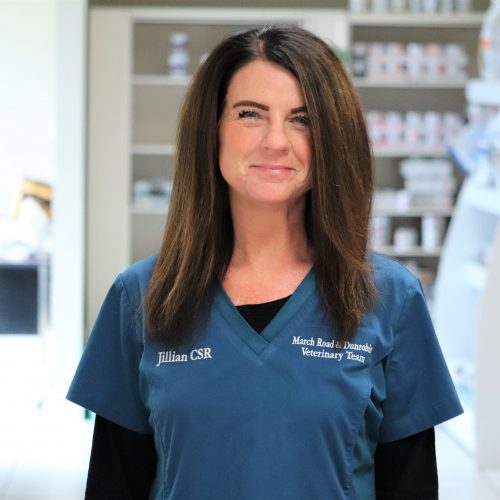 Jillian has had a passion for animals for as long as she can remember. After working in the banking industry for over 20 years, Jillian decided to follow this passion and become educated and experienced in the veterinary field. As our Client Services Manager, she understands the human-animal bond and does her best to help pet owners through concerning and heartbreaking moments. In her time off, Jillian loves biking around the city, indulging her love of rare plants, and spending time with her family and friends. She shares her home with one mischievous orange cat named Bernsie.